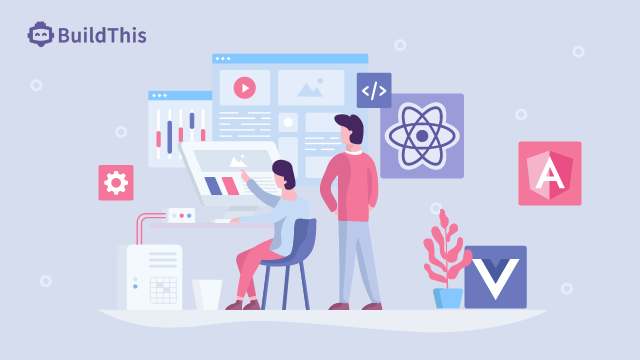 In this article, we are going to talk about three of the major front-end frameworks that companies use everyday to manage how their website feels and responds. By the end, you will be able to know the differences and similarities between them and how to decide which one you should ultimately decide to go with. This article will assume that you know the fundamentals of Javascript as it is the base of each of these frameworks.

The History Behind Each Framework

Angular was first released in 2010 and was developed by Google. Created by an employee at the time named Misko Hevery as a side project to help make building web applications a bit easier for some internal projects. It wasn’t until 2015 that there was a major rewrite of the framework due to the fact that new advancements in javascript started leaving angular behind. This was the pushing factor that moved it into Angular 2+ (with the newest stable version being 10) that allowed for a more maintainable code base.

React was first released in 2013 and was developed by Facebook. Created by an employee at the time by the name of Jordan Walke, and the early version prototypes called FaxJS was first deployed in Facebook’s news feed and later on Instagram in 2012. In 2013 when it was first open sourced, many people were susceptible due to it seeming like a step backwards instead of forward. It wasn’t until 2015 when Netflix and Airbnb announced they would be using React that it became stable.

As the youngest member of the major front-end frameworks, Vue was released in 2014 and was developed by ex-google employee Evan You. He started off this project by saying, “I figured, what if I could just extract the part that I really liked about Angular and build something really lightweight.” So that’s what he did. It wasn’t until early of 2015 when the Laravel community really started to integrate Vue with Laravel that it really took off.

I figured, what if I could just extract the part that I really liked about Angular and build something really lightweight. -Evan You

The Advantages & Disadvantages of Each Framework

In Angular, components are referred to as directives, which are essentially markers on DOM elements that Angular can then track and attach specific behavior too. Angular will then separate the UI from the behaviors, which is what makes it unique from VUE or React. While Angular has a very steep learning curve, it is a complete solution that incorporates the entire MVC. For larger companies with large teams who already use Typescript, Angular can be a very good solution.

Unlike Angular, React combines the UI and behavior into its components. Also unlike Angular, react is not a complete framework and will require multiple third party libraries to make things work and behave the way that you want. React is a lightweight framework that utilizes a virtual dom to enhance the performance of an application that needs to regularly update content. Because React is not a full solution, the learning curve is not as steep as something like Angular, and you may end up utilizing more third party plugins that you have to make sure are well maintained and kept up to date. React is a great solution for start ups and for people who want flexibility. React allows you to very quickly prototype and create individual components quickly where it will allow your application to be very flexible. React also is very handy for creating cross-platform applications due to its sister framework, React Native.

Like React, Vue combines the UI and behavior into components. Vue is also the most customizable of the three. Vue allows you to combine the UI and behavior of components from within each script. Because of the overlap between Vue, Angular, and React, it is very easy to transition from Angular and React into Vue. This allows for a fairly easy learning curve if you are coming from one of the two, but can also cause confusion on the differences. Vue is also the smallest of the three frameworks which makes it ideal for single-page applications. Vue is also a very ideal solution for startups as you can use a single command to easily debug and prototype your application.

Still not sure which framework to use? Here at Buildthis we have expert developers that can help walk you through your application and figure out a solution that works within your budget and timeframe to get you on the right track.