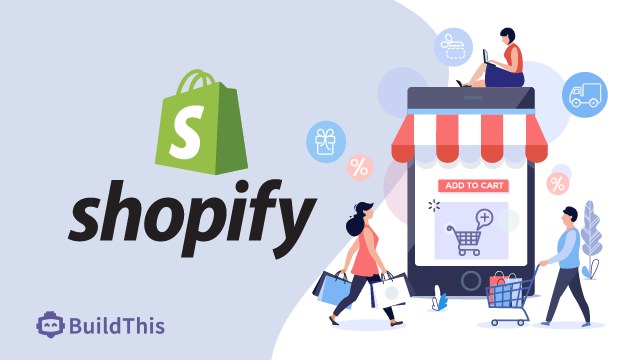 Starting an ecommerce website can be an extremely daunting task, especially when it comes to choosing the right solution to use to build your online store. Even the tiniest bit of research into the available eCommerce options can feel overwhelming due to the number of choices and the variance between each one. In this article, we examine the primary features and functions of Shopify, one of the more popular eCommerce platforms available, and summarize the steps and skills you need to get your Shopify site up and running.

At its most basic level, Shopify is a ‘hosted’ web application that enables the creation of an ecommerce store. The term ‘hosted’ means that it can only run on its own servers, which saves you the task of having to find your own hosting company. It also means that you never truly own the product, instead you pay a monthly subscription fee to use or almost lease it. This ‘hosted’ solution can be a double edged sword as the user is pretty much tied to the will of Shopify. For instance, if Shopify went out of business, its customers would be left having to migrate away from the platform or build from scratch elsewhere. However with Shopify boasting, “1,000,000 users, and between 2016 and 2019 generated $319bn in sales.”, this is an unlikely risk. A bit more plausible scenario would be for Shopify to increase its subscriptions fees or its credit card processing fees, in which case its customers would have no choice but to comply.

After choosing Shopify as an Ecommerce solution, the first question a customer needs to decide on is what Shopify monthly plan they want to go with. Shopify has plans ranging from $29.00 to $299.00 per month. As a note, Shopify does offer a $9.00 Shopify Lite plan, however this does not actually provide the customer with a standalone store, it’s to access a few of Shopify’s tools. The 3 main plans are the $29/month Basic Plan, $79/month Standard Plan, and the $299/month Advanced Plan. These plans vary in the services offered, but one thing to note is that the credit card processing fees range from 2.9% to 2.4% depending on the plan, the low end of that being slightly lower than the average processing fees that you’ll see from most major players. Similarly, Shopify offers higher shipping discounts within it’s more expensive monthly plans.

After you have chosen your Shopify plan, you’re ready to begin using the platform to build your store. Like many other Content Management Systems, this process starts with a theme. Shopify offers a range of free and premium themes customizable to fit your branding guidelines and requirements. Shopify’s primary audience consists of people with little to no development or coding experience, thus empowering small businesses who may lack the necessary funds for a more custom developed eCommerce solution. Therefore, just about any Shopify theme you choose can be configured and managed on your own.

Once a theme has been chosen, you can then begin building your store by entering products in the backend and creating the front-end ‘storefront’. The backend dashboard is a very clean and simple interface that is straightforward and easy to use. The front-end editor is adequate; it gets the job done with a simple yet somewhat outdated WYSIWYG (what you see is what you get) approach. With other website platforms like Bigcommerce, WordPress or Squarespace dropping the WYSIWYG approach for the more dynamic and flexible drag and drop functionality, it may only be a matter of time before Shopify moves in this direction as well.

Once you have products in the backend and the front-end built out, you will need the ability to accept payment as well as ship the product (if what you’re selling isn’t digital or virtual).  With Shopify being an eCommerce-specific solution, they give you access to a number of easy to use out-of-box tools. One of those tools is Shopify Payments, which handles your credit card processing and the credit card processing fees, which like we mentioned earlier, has tiered fees depending on your monthly plan. You do have the ability to utilize your own 3rd party payment processor, however Shopify will still take between 0.5%- 2% in processing fees in addition to whatever fees are charged by your 3rd party processor. Because of its size, Shopify does have favorable terms with most major shipping companies and that translates to fairly generous discounts for shop owners. The caveat is that if you are using the out-of-box Shopify Shipping solution, it can turn out to be very expensive as you need to be on the $299/month plan to receive rates directly from carriers. Another feature to note is that Shopify will calculate tax automatically for Canadian, EU, and US stores, which often has to be updated manually or added through a 3rd party extension for other eCommerce platforms.

Shopify can be a great solution to provide eCommerce capabilities to a wide range of companies and individuals, however when your store extends outside of the “Shopify box” it can  become costly and difficult to maintain.

One of those constraints is content marketing, or just producing non-eCommerce related content (e.g. ‘About Pages or Blogs’). This can be inflexible at times having to adhere to the theme used, and slight customizations to the themes templates are often very complicated.  This is a particularly big downfall for individuals and businesses who use consistent content marketing to organically boost traffic and draw in new customers.

Email hosting is also not provided by Shopify, which means users are either pushed into email forwarding or a 3rd party app within the Shopify marketplace. Email forwarding allows the emails to appear like they are from the store’s actual domain. However this can be a messy and unorganized approach if the store has multiple admins and it is not a clean experience. The 3rd party apps for email hosting within the marketplace tend to be a monthly cost per mailbox which can also add up quickly.

Shopify’s pricing is a bit of a double-edged sword as well. On one hand, the built-in processor is a positive and provides easy out of the box functionality, but the monthly fees add up and the number of those fees tend to grow with the store’s growth. Self-hosted solutions like WordPress + Woocommerce tend to have larger initial development costs that tend to drastically decrease after the store is established, this allows companies to more properly plan out revenue goals.  Shopify and many of the apps within the marketplace make their money by shaving off your bottom line on a monthly and potentially a transactional basis. This can make it difficult to predict and forecast revenue.

I must also note that if you were to ever grow out of your Shopify store or require a functionality that Shopify cannot provide and want to transfer to another eCommerce solution you are often left out in the cold. The most you could hope for is a CSV export of your products and that still  leaves you having to rebuild from scratch.

In summary Shopify is a great scalable solution for smaller to medium sized retailers. Its out-of-the-box features allows stores to be built quickly and cost effectively. While these tools allow for very low entrance costs, they can be constraining at times. Shopify allows you to do a lot quickly and cheaply, but when something is a bit outside of that scope it usually requires a 3rd party app from the marketplace which often requires another monthly subscription fee or even custom development (which is usually what Shopify users are trying to avoid). All in all, Shopify is great for some stores, but if a store does not quite fit into the Shopify “box” it can turn out much more expensive and possibly eat into the bottom line month after month. If you need help deciding on an eCommerce solution and looking into using Shopify, BuildThis can help see if this is the right choice for you and help you get your project started on the right foot.